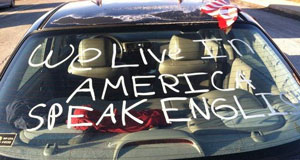 The New York chapter of the Council on American-Islamic Relations (CAIR-NY) today questioned the justification offered for an apology from a school in that state after a student read the Pledge of Allegiance in Arabic Wednesday as part of a celebration of National Foreign Language Week.

The principal's apology, which came following objections to the Arabic pledge from some students and residents of the school district, claimed that the commissioner of education recommends that the pledge be recited in English. But the New York State Education Department today said that its regulations governing schools do not specify the language in which the pledge should be recited.

A statement from Pine Bush High School says that planned activities for the week were to include reading the pledge and morning announcements in a number of different languages. "The intention was to promote the fact that those who speak a language other than English still pledge to salute this great country," it reads.

"The meaning of the Pledge of Allegiance is the same regardless of the language in which it's recited," said CAIR-NY Spokeswoman Sadyia Khalique. "When a simple student activity designed to promote mutual understanding receives such a negative reaction and the school in which it takes place is forced to issue a public apology, all Americans who value our nation's history of religious and ethnic diversity should be concerned. One has to wonder if such an intolerant response would have resulted from reading the pledge in a language other than Arabic."

This is not the first time the use of Arabic at a high school has caused an outpouring of prejudiced sentiment.

In 2013, when students in a multicultural club at Rocky Mountain High School in Colorado translated the Pledge of Allegiance into Arabic and recited it for the student body, it generated hate calls and threats from parents. Translations of the pledge into French and Spanish had previously been recited to students without incident. Principal Tom Lopez said that he was "getting worn down" by "how intense their sense of hate has been."

Also in 2013, parents of students in Daphne High School in Daphne, Ala., opposed the school offering an Arabic language class, falsely claiming that it would cause students to learn a "culture of hate." One parent was quoted as saying "[Arabic] is not just another language; it is a language of a religion of hate." Another parent said, "[Arabic] culture is intertwined with Islam."