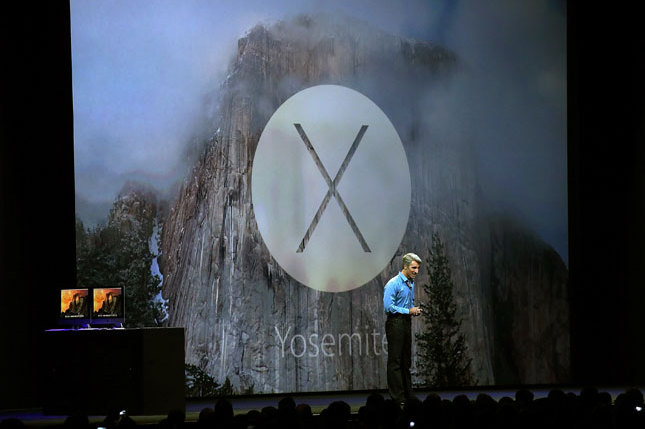 Apple says the next version of the Mac system will named after the Yosemite National Park, now that Apple is naming the software after California locales rather than cats. Although it is separate from Apple's iOS system for iPhones and iPads, Apple CEO Time Cook says the two systems have been engineered to work seamlessly together.

The company is previewing new features for phones, tablets and Mac computers at its 25th annual conference for software developers in San Francisco.

There's speculation that Apple could use Monday's keynote to showcase its plans to help manage people's health, finances and homes. There's also a Ferrari spotted in the building, an indication that Apple will update people on CarPlay, its project for embedding automobiles with some of the iPhone's main applications.

Here are the highlights on what's been announced so far and what's coming:

The new Mac system, called Yosemite, will have a translucent design. The notification center will use that design, for instance, to give you an advance look at your calendar, weather and other information.

You'll be able to search for content on the computer and on the Internet at once, similar to a feature that came with Microsoft's Windows 8.1 system.

Apple is expanding its iCloud storage service so that you can store and sync files of any type, not just the ones designed specifically for iCloud. It's similar to how services such as Dropbox, Google Drive and Microsoft's OneDrive let you work with the same files on multiple devices more easily.

A Mail Drop feature will make it easier to send large files. Instead of pushing the entire file by email and overloading mail servers, the Mac will create a link that the recipient can click for the full file.

The free Mac update will be out this fall. A version is available for developers Monday. This summer, Apple will also make a test version available to selected customers who aren't developers.

CHANGES TO IPHONES AND IPADS:

Apple previewed new features in iOS 8, the next version of the operating system for iPhones and iPads. The new software will likely come with new devices for the holiday season, with free updates available for recent models. The current version, iOS 7, came out in September and sports a new design that favors simplicity over three-dimensional icons that try to mimic their real-world counterparts.

IOS 8 is widely expected to include a built-in health-management tool to help people track their vital signs, diet and sleeping habits. This tool could be similar to Passbook, a feature that Apple built into iOS two years ago to store tickets for flights and events, as well as digital gift certificates. Apple's chief rival, Samsung Electronics Co., incorporated fitness-related features in its latest flagship phone, the Galaxy S5.

The new iOS may also include a long-awaited digital wallet that enables Apple to process payments on iPhones and iPads. Google Inc. has already tried something similar on its Android software for smartphones, but it hasn't gained much traction in digital payments.

There's been speculation that Apple will unveil a home automation system that will enable iPhones and iPad to become a remote control for managing lighting, security and other household appliances with wireless connections.

Apple's AirDrop feature, which has let you share files with other devices of the same type, will now let iPhones and Macs share directly with each other.

A new "handoff" feature will let you switch devices more easily, so you can start writing an email on a phone and finish on a Mac. And when a call comes in on your iPhone, you can get caller ID information on your Mac.

The iMessage chat service will now let you communicate with devices that aren't running iOS, such as those running the rival Android system from Google.

Apple is developing a CarPlay to let drivers can control cars with voice commands, a touch on the steering wheel or a swipe on a display screen in the dashboard. Cars with built-in CarPlay services and radios that are compatible with CarPlay are both expected this year. Apple might give the developers an update on CarPlay's progress.

Last week, Apple announced a deal to pay $3 billion for Beats Electronics, a headphone and music streaming specialist. The deal brings rapper Dr. Dre and recording impresario Jimmy Iovine to undetermined roles at Apple. During a demo Monday, Apple executive Craig Federighi placed a call to Dr. Dre to welcome him to Apple. Dr. Dre joked about when he should get into work.

In late April, Apple updated its MacBook Air laptops with faster processors. It also lowered the starting price to $899, down from $999.

COMING FOR THE HOLIDAYS:

Apple typically holds a separate event in September to announce new iPhones. Updates to the iPad are also likely, possibly at yet another event. Many analysts also believe the company will release an Internet-connected watch later this year as part of Apple's expansion into wearable technology.

US, EU sign new pact on artificial intelligence collaboration'Results of our research will extend beyond our partnership to benefit additional international partners,' says US national security advisor

Blight or blessing? AI chatbot muddies waters for educatorsEducators raise concerns about cheating, but solution does not lie in banning ChatGPT, experts argue