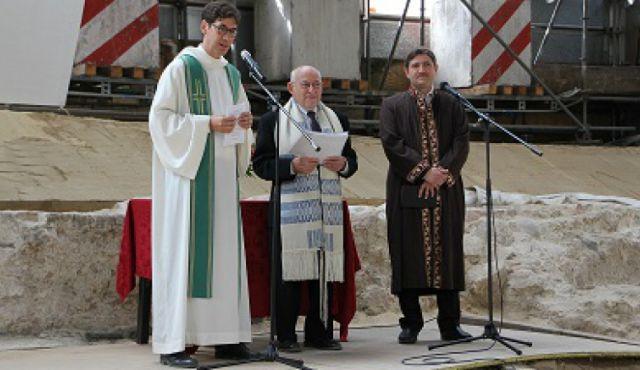 Fund-raising campaign launched for the House of One, where three monotheistic faiths will worship under one roof.

The world's first combo church-synagogue-mosque, in which adherents of all three monotheistic faiths will worship under one roof, is being planned for Berlin, the Independent reports.

Known as the House of One, the project already has an architect – chosen by competition – and a site: Petriplatz in the heart of Berlin. A crowd-funding campaign to raise funds for the project was launched last week.

The estimated cost of the building is 43 million euros, but construction will begin once the first 10 million euros have been raised.

"Berlin is the city of the peaceful fall of the Berlin Wall and the peaceful coexistence of believers from different faiths – they yearn to understand each other," Hohberg told The Independent.

For Ben-Chorin, the House of One will be a place to heal old wounds without forgetting them. "Berlin is the city of wounds and miracles," he said. "It is the city in which the extermination of the Jews was planned. Now, the first house in the world for three religions is to be built here."

Architect Wilfried Kuehn has designed a striking brick building, with a tall, square central tower for communal meetings and separate houses of worship for the three faiths. Each of the three areas in the House will be the same size, but of a different shape.

Kuehn said that each of the singular spaces is designed according the practices of each faith.

The location on Berlin's central Museum Island is rich with history. Petriplatz was the site of the first church in Berlin, dating back to the 12th century, which was badly damaged at the end of World War II and subsequently destroyed by the East German authorities.

When, six years ago, archaeologists uncovered remains from an ancient graveyard at the site, it was "quickly agreed that something visionary and forward looking should be built on what is the founding site of Berlin," Hohberg said.