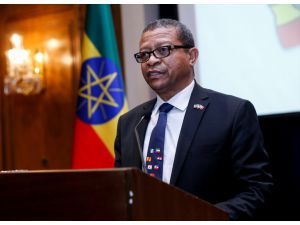 ISTANBUL (AA) - Ethiopia inaugurated its consulate general offices in Istanbul in a ceremony on Thursday.

Delivering an opening and welcome speech during the ceremony, Consul General Wondimu Gezahegn said Ethiopia and Turkey had a longstanding relationship of more than a hundred years.

"The diplomatic relationship between Ethiopia and Turkey began in 1896 with the exchange of delegates, during the rule of Sultan Abdulhamid II and the Emperor of Ethiopia Menelik II," Gezahegn said.

He said this symbolic relationship had grown through high-level visit exchanges, outbound Turkish investment to Ethiopia, as well as through trade volume and technical cooperation, particularly in human resources development.

Ethiopia is located in East Africa, with a population of 100 million. It is one of the world’s fastest growing economies, according to the IMF.

Turkey and Ethiopia are key economic partners in many areas. Trade cooperation between the two countries is on the rise. Turkish firms continue to invest in various sectors in the country.

"If you look at the Turkish investment in Ethiopia, currently more than 165 Turkish companies with a capital of more than $2.5 billion are investing in Ethiopia. And some others are in the process," Gezahegn said.

The consul general said the office in Istanbul was opened to respond to a request of Turkish companies, Ethiopian business travelers as well as Ethiopian nationals residing in Turkey.

"I candidly would like to extend my invitation to all Turkish businesses, communities, to which my country is opening its arms and [stands] ready to welcome you to do business together in all sectors[...]," Gezahegn added.

The consulate general office will also provide visa services for all Turkish citizens.

The foundation was established in 2016 to take over the administration of overseas schools linked to FETO. It also establishes schools and education centers abroad.

To date around 30 African countries have handed over FETO schools to Maarif or closed them at Ankara's request.

FETO and its U.S.-based leader Fetullah Gulen orchestrated the defeated coup of July 15, 2016, which left 250 people martyred and nearly 2,200 injured.

Ankara accuses FETO of being behind a long-running campaign to overthrow the state through the infiltration of Turkish institutions, particularly the military, police, and judiciary.

FETO also has a considerable presence outside Turkey, including private educational institutions that serve as a revenue stream for the terrorist group.