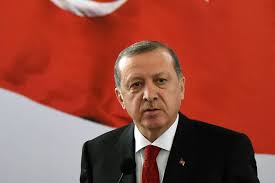 “It wouldn’t be very proper of us to say goodbye to him where we are back home so that’s why we had to come here,” Erdogan told reporters as left a tour of the Muhammad Ali Center following the noon janazah prayer for Ali. “He converted to Islam at the age of 22 and he has become a freedom fighter since then.

“As one of his Muslim brothers, I thought that it was a duty for myself and on behalf of my nation to be present at his funeral,” Erdogan said in remarks translated from Turkish.

“The way he stood up for his freedom and the freedom of all and his stance against the Viet Cong war was actually exemplary. And as a politician it is something that you cannot underestimate or overlook.”

Asked whether he would hold any official meetings while in the U.S., Erdogan said: "I shall be going tonight, I just came here for this purpose."

Erdogan was present at the Freedom Hall in Ali’s hometown of Louisville where thousands gathered Thursday to give the “people’s champ” a sendoff.

The prayer service attended by many dignitaries, religious leaders and sports figures, will be followed by a memorial service Friday at the Kentucky Yum! Center.

The final public ceremony of Ali’s funeral is expected to attract nearly 15,000 fans.

Ali died last Friday after a more than three-decade battle with Parkinson’s disease.

OPINION - Structures matter: The vicious cycle of Islamophobia‘We have barely reached the second month of the year, and European countries have already witnessed several events that prove to us the importance of structures in the constitution of anti-Muslim racism’