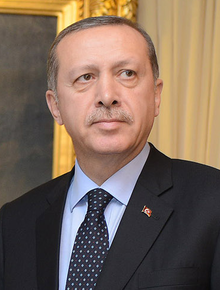 In article, Turkish president explores Ali's personality, significance for Turkey and the world

ANKARA (AA) - Turkish President Recep Tayyip Erdogan on Thursday wrote an article over the demise of one of the biggest personalities of the 20th century, Muhammad Ali, who passed last Friday at the age of 74 after a long battle against Parkinson's disease.

"One might wonder why the president of Turkey would fly halfway around the world to attend the funeral of an American boxer. The answer is simple: I will pay my respects to Muhammad Ali on behalf of the Turkish people because his extraordinary story must not end here. By putting his ideals into practice, world leaders can address many persistent problems," Erdogan wrote.

Stressing that Ali was an exceptional athlete and a remarkable human being, Erdogan counted himself among those who would get up in the wee hours -- due to time difference between Turkey and the U.S. -- to watch the Louisville Lip’s fights in the 1970s.

"Ali had become such an awe-inspiring figure by then that entire families would talk about professional boxing over hot tea and pastries and review the champ’s matches with friends and colleagues over the following days.

"The excitement was so palpable that a Turkish folk singer released a popular single to immortalize the "Rumble in the Jungle," Ali's title match against George Foreman in 1974, and hail the People’s Champion as the hero of oppressed people everywhere," the president said.

Erdogan said Ali's political activism, as well as athleticism and intensity attracted the people to his persona across the world.

He recalled that Ali refused to be recruited in the army in the Vietnam War, after which he faced serious consequences that ranged from great financial loss, a potential prison sentence and being stripped of his title.

Erdogan quoted him as saying at the time, "I ain’t got no quarrel with them Viet Cong,” in reference to Vietnamese people. “I’m not going 10,000 miles from home to help murder and burn another poor nation.”

Erdogan said the legendary boxer was a compassionate man who had the courage to show solidarity with his fellow human beings.

Depicting Ali as a sincere Muslim and a man of peace, Erdogan said he was troubled by the irresponsible association of Islam with violence.

"What really hurt him, he said after the 9/11 terror attacks, was that 'the name Islam is involved, and Muslim is involved and causing trouble and starting hate and violence. Islam is not a killer religion. Islam means peace. I couldn’t just sit home and watch people label Muslims as the reason for this problem'. And he was right about what would eventually become a discriminatory campaign against a community of 1.7 billion believers around the world," Erdogan wrote.

The president said Ali could inspire world leaders, and his message of peace, freedom and solidarity informs Turkey's key policies.

"Today, Turkey is the world’s largest refugee host and third-largest provider of humanitarian assistance. Having adopted an open-door policy toward Syrian refugees in 2011, the country has welcomed more than 3 million people fleeing from war and spent about $10 billion to meet their needs.

"Keeping in mind his experiences, Muslim nations must take steps to ensure that members of Christian and Jewish communities feel included," said Erdogan.

"Since 2002, Turkey has spent millions of dollars to rebuild decaying churches and synagogues, which we consider a crucial part of our heritage. In 2007, the Cathedral of the Holy Cross on Akdamar Island, a medieval Armenian church, re-entered service after comprehensive restoration work. Last year, the Grand Synagogue of Edirne, one of Europe’s largest Jewish temples, was reopened after being restored," said the president.

The president said that while Muhammad Ali’s athletic accomplishments would be frequently mentioned, it was important to keep in mind that his passing did not mean his ideas cannot take hold.

"The issues Ali raised decades ago remain relevant. As such, the right way to honor the People’s Champion is to put his vision of liberty, equality and solidarity to work," Erdogan said.