All of Basaksehir's five goals came in the first half, with Stefano Napoleoni, Gokhan Inler and Emmanuel Adebayor each scoring one while Edin Visca contributed with two goals.

The last time a team was 5-0 up over its opponent in the Turkish league in the first half of a game was back in 2009 when Fenerbahce comprehensively defeated Hacettepespor.

A comfortable 5-0 victory over the league's last-placed team gave the Istanbul club the top spot back, which is now at 42 points -- one point better than second-placed Galatasaray.

Black Eagles continue to be at 4th place with 36 points.

Galatasaray, on Saturday, defeated Osmanlispor 2-0 at home to improve their score to 41 points.

League's other title-chasing Istanbul club Fenerbahce were hosted by Trabzonspor on Sunday evening; both teams ended up sharing points with a 1-1 scoreline.

Fenerbahce continues to be at 3rd place with 37 points.

Here are the standings after match week 19: 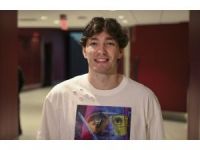