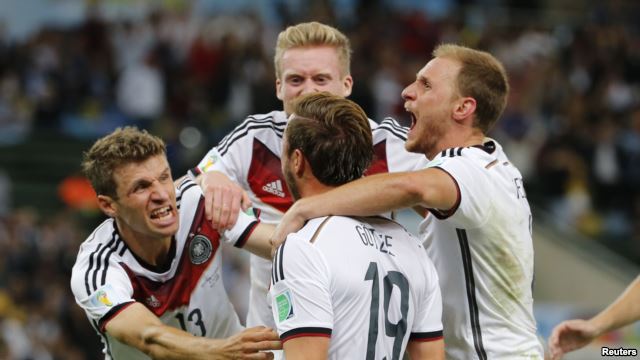 Germany has become the first European team to ever win a World Cup in the Americas, beating Argentina in Sunday's final in extra time, 1-0.

German substitute Mario Goetze scored in the 113th minute to account for the win before a capacity crowd of about 75,000 fans at Maracana Stadium in Rio de Janeiro, Brazil. Goetze craftily used his chest to control a crossing pass on the left side from teammate Andre Schurrle and kicked it inside the right post past Argentine goalie Sergio Romero. Germany's Mario Goetze (C) celebrates with teammates after scoring against Argentina during extra time in their 2014 World Cup final at the Maracana stadium in Rio de Janeiro July 13, 2014.
x Germany's Mario Goetze (C) celebrates with teammates after scoring against Argentina during extra time in their 2014 World Cup final at the Maracana stadium in Rio de Janeiro July 13, 2014.

Goetze, a midfielder who plays for Bayern Munich, came off the bench toward the end of regulation for Miroslav Klose, who in the 7-1 semifinal win over Brazil became the all-time leading scorer in World Cup history.

The goal by Goetze goal triggered memories of the one by Spain’s Andres Iniesta just before the end of extra time in a 1-0 win over the Netherlands in the 2010 World Cup championship in South Africa.  It also gave Germany its fourth World Cup title but the first as a unified country.  West Germany won in 1954, 1974 and 1990. It united with East Germany in October of 1990.

South American teams won the seven previous times the tournament was played in the Americas.

Clashes erupted between youths and the police near the city's Obelisk monument, hours after what started as a peaceful rally.

Officials say at least 15 police officers were injured in the skirmishes.

"It is unbelievable and an awesome experience," Germany's goalie Manuel Neuer told German television.  "We have had incredible cohesion since the start of our preparations.  Germany (is) world champions.  I don't know how long we will celebrate, but we will go about it with big grins."

After the game, the German team made its way up the stairs of Maracana Stadium to raise the hallowed 18-carat gold trophy, as confetti rained down and fireworks exploded in the sky.

"It's incredible how hard we worked and what a performance we produced,'' team captain Philipp Lahm said.  "It's an incredible feeling.''

Germany and Argentina had met twice before in the World Cup title game.  Argentina won in 1986, and the Germans won in 1990.

This time, Argentina was hoping its superstar, Lionel Messi, would lead the South American football power to its third title.  But Germany's stingy defense neutralized Messi, a four-time FIFA World Player of the Year, for most of the game.

Messi, who scored four goals in the tournament, all in the group stage, received the Golden Ball award as the World Cup's best player.  In the end, though, he was still walking in the shadow of Argentine football legend Diego Maradona, who led his country to the 1986 World Cup title, in part, with his famous "Hand of God" goal and the "Goal of the Century."

Sunday's game marked the third straight World Cup championship that went to extra time.  Both teams had solid chances to score before Goetze's goal, with the Argentines missing out on a few that would later haunt them.

In the 21st minute, Argentina's Gonzalo Higuain intercepted an errant pass and broke for the net but hooked his shot far wide.  He found the net in the 30th minute but was called for offside.

Early in the second half, Messi stood one-on-one with Neuer, who later won the Golden Glove award for the tournament's best goalie, but sent his shot wide.  Argentina also failed to convert on opportunities in extra time.

"When there are chances in a game that is so evenly balanced, you have to take them," Argentina's coach Alejandro Sabella said of the match.  "We lacked a bit of efficiency."

Sabella praised his team for staying even with Germany for so long after a tough semifinal against the Netherlands.  Argentina won that game in a penalty shootout, 4-2, after a scoreless draw.

"The only thing I can do is congratulate my players," Sabella said.  "The work they did was extraordinary, and [I] also congratulate Germany."

The Argentines went undefeated in the World Cup until the championship game.  They played Germany without speedy winger Angel Di Maria, who was out with a thigh injury.

In addition to the award to Messi and Neuer, Colombia's James Rodriguez won the Golden Boot award as the tournament's top scorer with six goals.