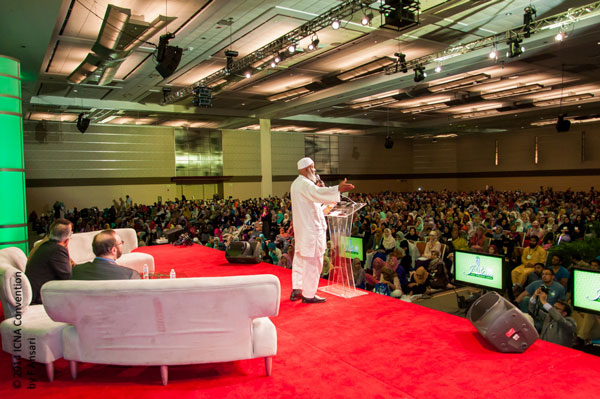 Thousands from across the country gathered at the Baltimore Convention Center over Memorial Day weekend to attend the 39th annual ICNA-MAS convention.

The energy in the air was palpable on Saturday morning, as people lined up to register before the event officially began. Thousands from across the country gathered at the Baltimore Convention Center over Memorial Day weekend to attend the 39th annual ICNA-MAS convention.

The theme – Faith. Submission. Service. – sought to generate reflection upon the multiple facets of faith and the path on which it directs humanity. It focused the theology of Islam and its manifestation as service to God and service to mankind. In addition to those attending several thousands more watched the live broadcast of the sessions.

A section of the bazaar.

Together with the main sessions of the convention, there were a total of 128 sessions over the three day period.

Together with the main sessions of the convention, there were a total of 128 sessions over the three day period. Most of the parallel sessions were self contained series, such as the “Social Justice Series”, “Community Series”, “Parenting Series”, and so forth. There were also programs held solely in Spanish, Bangla, Arabic and Urdu which were popular among attendees.

One of the most packed parallel sessions was the Window to Islam series which sought to provide a space for individuals to gather in a spirit of dialogue and honest enquiry, and discuss a range of socio-religious issues pertaining to Islam and America.

“It’s great, I’m excited,” said Farzana Musawwir, as she sat for the first of these sessions, featuring Dr. Yasir Qadhi, Ustadha Yasmin Mogahed and Dr. Tariq Ramadan. People sat jammed together on the floor and spilled into the hallways. The topic for the session was “What is Your Goal” and covered the meaning of life and the purpose of existence.

This year’s Youth Conference, themed “Heart of Glass: Shadows of Doubt”, witnessed crowds larger than ever before. The impressive programming drew praise from both Sh. Omar Suleiman and Ustadh Nouman who said the topics were engaging, relevant and pragmatic.

As compared to last year, there was a sharp increase in the number of booths to 337, with the majority falling under the clothing and fashion category.

Young Muslims Brothers’ only and Sisters’ only sessions attracted huge numbers as well. In the session titled “A Treasured Path”, Dr. Dalia Fahmy’s speech moved the entire room to reorient their perspective on women.

“Her talk was incredibly empowering,” said a Young Muslims sister attending the session. “She not only engaged in shifting perception, she imparted practical advice for us to implement in real life. “

The yearly tradition of the brother’s only Midnight Basketball Tournament was, as always, a tremendous success. Hundreds of young Muslims competed for hours to finally determine one winning team.

Meal times tested the patience of attendees with many waiting in long lines food. The extensive bazaar continuously thronged with people, bustling to buy books, art, scarves, jewelry and food. As compared to last year, there was a sharp increase in the number of booths to 337, with the majority falling under the clothing and fashion category.

ICNA hosted its annual “Scholars and Community Leaders Recognition Lunch” on Sunday at 12pm, to honor the lifelong commitment of several individuals to the national and international Muslim community. This year’s awardees were Dr. Teepu Siddique, Professor Anees Ahmed, Dr. Tariq Ramadan, and Br. Iqbal Baqai. The later was awarded posthumously; his sons accepted on his behalf.

Attendees had a huge choice of vendors at the bazaar.

The Muslim Children of North America hosted a number of programs, including interactive drum lessons and an animal exhibit. The most popular program was Camali, who, in addition to setting up an area for bungee jumping, performed a show on Sunday to a large audience of eager children. For the first time, organizers also added sessions for individuals among the age range of 11-15 termed Young Muslims Junior.

People lining at the coffee store.

The annual Quran Competition pulled 130 children together from 20 different states to compete in three age categories. The 12 winning participants went home with trophies and cash prizes equaling several thousand dollars. The top winner, an eight year-old girl, was the youngest among the contestants and she opened the Sunday evening keynote session of the convention.

Meal times tested the patience of attendees with many waiting in long lines food.

This was succeeded by the entertainment session, which consisted of spoken word by Hamza Siddiqui, nasheed recitals by several individuals, and stand-up comedy by Mohammed Amer. Amer’s hilarious descriptions of his Palestinian family and the insane traffic of Cairo captivated the audience.

Young Muslims held a trademark Secret Session parallel to the main entertainment session. The attendees packed the room from wall to wall and posted questions about a diverse range of issues. One of the individuals felt it was the best session at the entire convention due to its intimate nature.

“It was a great convention,” said Dr. Tariq Ramadan who was attending the ICNA-MAS convention for the first time. “JazakAllah Khayr for doing what you are doing and for serving the American Muslim society in America,” he said.

Also parallel to entertainment was the matrimonial session. Access was limited to the 175 paid registrants and the individuals were required to be accompanied by a wali. The makeup of this year’s session consisted of 30 percent men and 70 percent women. Ages ranged for both men and women among 18 to 56.

With so many sessions happening at once, attendees were grateful for the ICNA Convention 2014 app, available on the iOS and Android platforms, to organize their schedules and easily access the time, location, and description of the sessions.

Imam Omar Suleiman addressing the audience. The Islamic Circle of North America is grateful for the time and effort exerted by every single speaker at the convention.

“The app is great! It is very helpful,” said Musawwir. In addition to providing program details, the app also allowed users to read speaker introductions, gave them a map of the convention center, and listed food vendors and prayer times.

“We thank Allah, subhanahu wa ta’ala, for making this convention very successful,’ said Naeem Baig, president of ICNA. The convention is a huge undertaking that requires a lot of effort and human and financial resources, and we are incredibly thankful to our members and volunteers for making this possible, he said.

“Many people came to me to thank ICNA for hosting this event. However, the most humbling was when a sister told me that it was her first time attending an Islamic convention and she did not want to leave.”