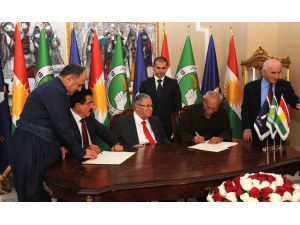 ERBIL (AA) - Representatives of the Patriotic Union of Kurdistan (PUK) and the Kurdish Gorran movement met Tuesday in Erbil, the Kurdish Regional Government's (KRG) administrative capital, where they signed an agreement touching on a host of political and economic issues.

The 25-article agreement between the two parties, both of which have large blocs in the Kurdish parliament, is ostensibly aimed at promoting cooperation between the two signatories.

The deal touches on several important issues, including Iraq’s system of governance, economic situation and petroleum sector, along with an anticipated referendum to be held in the region.

Gorran ("Change" in Kurdish) stands in opposition to the two-party coalition that currently governs the KRG, which consists of the PUK and the Kurdistan Democratic Party.

Pope open to talks with Ukrainian, Russian leaders for peace in Ukraine'On the second day of the war, I went to the Russian Embassy to say that I wanted to go to Moscow to talk to Putin,' says Pope

US Navy divers, Coast Guard work to recover debris from suspected Chinese spy balloonF-22 fighter jet shot down balloon Saturday which had been spotted in US airspace off coast of South Carolina

Putin has never threatened me or Germany: Scholz'In our phone calls, our very different perspectives on the war in Ukraine become very clear,' says German chancellor