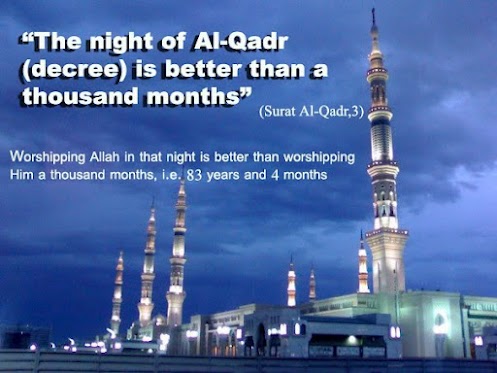 Alhamdulilah, Allah has blessed us to see another Ramadan and in sha Allah we should get an opportunity to experience Laila-tul-Qadr.

Alhamdulilah, Allah has blessed us to see another Ramadan and in sha Allah we should get an opportunity to experience Laila-tul-Qadr. In this night the worship of Allah the Most High as well as the performance of any noble deed are more valuable than those which were being done during a thousand months. SubhanaAllah! How powerful is that.I have put together some of the best practices during Lailat-ul-Qadr written by a well known Islamic Scholar. In sha Allah I hope its beneficial for you.1. Prepare a list before the evening starts listing all of the specific du‘as you want to make. This is not Sunnah - this is only because the Muslims of our generation are not good at ritual worship and long du‘as by themselves and need help, direction and structure.2. Pray ‘Isha in Jam‘ah – that’s half the night in prayer as stated by the Prophet (sallallahu ‘alayhi wa sallam) in Muslim, and that’s a portion of Laylat’l-Qadr achieved as stated by some of the Salaf like Ibn al-Musayyib and al-Shafi‘.3. Pray with the Im?m, don’t leave him after 4 rak‘ah or 8 rak‘ah or whatever. Finish the Taraweeh prayer with him and the Witr prayer as well, even if he prays it early in the night. You have now achieved the reward of praying the *full* night, which if it is Laylat’l-Qadr, then you’ve achieved the full reward of standing the night of Laylat’l-Qadr as stated by the Prophet (sallallahu ‘alayhi wa sallam).4. Avoid setting up two night prayers, calling them Taraweeh and Tahajjud. Either elongate one of them to last longer in the night, or just pray one of them completely with the Imam with Witr. This is the Sunnah of the Prophet (sallallahu ‘alayhi wa sallam) in Ramadan. A single congregational prayer, not two of them, is the action of the Prophet (sallallhu ‘alayhi wa sallam).5. Make a HUGE amount of dua during ALL the rest of the time available before Fajr starts.6. If you feel the need to take little breaks in the night, only do the following in them:a) Give plenty of sadaqah, carefully and judiciously, to the highest-returning projects as possible, across as many fields and initiatives as possible, as varied as possible, as much as possible. Take advantage of the hugely multiplied rewards on offer.  b) Read or reflect on something beneficial about Allah or the Qur’an. Focus on His Mercy. And then call upon that Mercy later in your du‘a.c) Keep your tongue busy with dhikr. Don’t waste a single second talking, watching or listening to anything from the dunya if possible. It’s just not worth it. It can wait one night, believe me.7. Reduce the amount of food and time you will spend on eating Suhur so that you can spend more time making du‘a. This night is about standing in prayer, yes, but if you’ve done the above, then that standing is sufficient insha Allah. Now make the night *all* about du‘a.8. If you want to bank on just *one* du‘a to really focus on during this night then choose the best Prophetic one of:Allahumma innaka ‘affuwun tuhibbul ‘afwa, fa‘fu ‘anna(O Allah, indeed you are the One who pardons, indeed you *love* to pardon. So please pardon me.)9. Pray Fajr in Jam?‘ah with the Im?m. You have just achieved standing the entire night in prayer as stated by the Prophet (sallallahu ‘alayhi wa sallam) in al-Bukh?ri. So that’s *all* of Laylat’l-Qadr in standing achieved if it was indeed that night.10. Finally, get to sleep quickly after Fajr so as to not to sleep too much during the day because there’s more ‘ibadah to be done on the 27th *day* too, to complete a successful *night* of al-Qadr as per the actions of the Salaf.Remember this is the night of calling upon Allah and crying to Him. But that crying should be focused not in fear of Him tonight, but rather this is the night we cry in hope of His infinite Mercy. Make it count folks.Practimate

Biden approves $10B HIMARS sale to Poland amid Ukraine war18 HIMARS rocket launchers, associated equipment and ammunition included in potential sale, according to US administration