Most Common Languages in U.S. 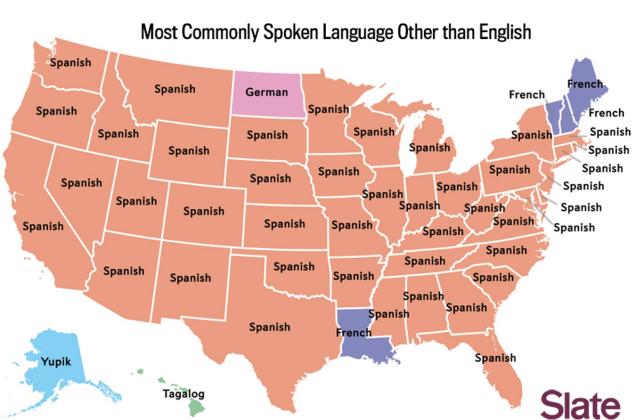 The Most Common Languages Spoken in the U.S. After English and Spanish

Using data from the American Community Survey conducted by the Census Bureau, where respondents were asked to list the languages spoken in their household, Ben Blatt from Slate made maps of the most commonly spoken language in each state.

As a resident of New Hampshire, I have no idea how this could possibly be French. I hear Spanish MUCH more often than French. I rarely hear French at all but Spanish usually every time I leave the house and go to a public place.

Spanish blankets the country except for two French areas: in a handful of states near the Canadian border and Louisiana. Yupik, a Native American language, is the second-most spoken language in Alaska, and Tagalog is popular in Hawaii thanks to the large Filipino population. Now keep your eye on that German-speaking pocket in North Dakota.

If we remove Spanish from the mix, we start to see some truly surprising trends. All sorts of ethnic, immigration, and cultural patterns start to reveal themselves. You can see more Native American languages like Navajo and Dakota, lots of Korean and Vietnamese states, and plenty of our original Colonial Era holdouts: Italian, French, Portuguese. Then there are some outliers like Russian, Arabic, Hmong, and French Creole. And I don't think I would have guessed Tagalog would be the third-most spoken language in California.

The most shocking fact to me was seeing all the households that speak German—I can't say it's a language I hear hardly anywhere except when I travel to Europe. However, the prevalence of all those German-speaking states doesn't mean that German is the third most-spoken language by Americans. The third-most spoken language in the U.S. overall? Chinese. Check out the story for plenty more language-based maps.