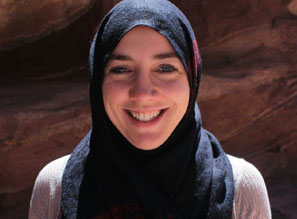 Indira Kaljo of Los Angeles, Calif., told CAIR that she is seeking a professional contract in Europe, where she already played for two years before deciding to wear hijab. The 26-year-old native of Bosnia says that FIBA's ban on hijab is discriminatory and that players of other faiths do wear religious symbols and attire similar to the Islamic scarf.

CAIR's second request in as many weeks came after a California Muslim athlete reported that she is being denied a professional career at the international level by the hijab ban.

The first request followed reports that Bilqis Abdul-Qaadir, an American Muslim woman who wears an Islamic head scarf (hijab), is unable to pursue a professional career as a basketball player at the international level due to Article 4.4.2 of the FIBA Official Basketball Rules banning "headgear."

CAIR sent a letter to FIBA President Yvan Mainini, which stated in part:

"No athlete should be forced to choose between faith and sport. Muslim women seek to participate in sporting activities should not face artificial and arbitrary barriers to that participation."

CAIR asked that FIBA's Technical Commission meet as soon as possible to discuss changing this discriminatory rule to allow athletes of all faiths, to compete while maintaining religious principles.

FIFA's International Football Association Board recently acknowledged the religious rights of soccer players by changing its rules to allow hijabs and Sikh turbans.

In 2011, CAIR applauded a decision by the International Weightlifting Federation (IWF) to modify its policy on competitor apparel to allow modest Islamic attire. The IWF policy change came following intervention by CAIR in the case of a Muslim weightlifter in Georgia who wished to compete while covering her hair, arms and legs.