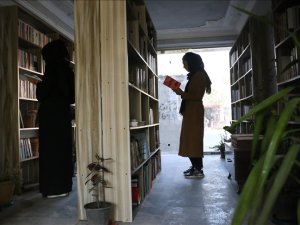 Women and girls have been deprived of their rights, including the right to an education, and disappeared from public life under the Taliban.

''On behalf of the secretary-general, they held a series of meetings with UN staff, national and international NGOs and Afghan women to take stock of the situation, convey solidarity and discuss ways to promote and protect women’s and girls’ rights,'' UN Deputy Spokesperson Farhan Haq told reporters Wednesday.

''They stressed the need to uphold human rights, especially for women and girls, and were encouraged by exemptions being introduced that have allowed the resumption of some humanitarian activities that had been hampered following the ban,'' he said.

Haq said the UN delegation also commenced engagement with the de facto authorities on this matter and the longer-term perspectives for Afghanistan.

The Taliban's return to power in Afghanistan on Aug. 15, 2021 followed by the disruption of international financial assistance has left the worn-torn country in economic, humanitarian and human rights crises.

Women and girls have been deprived of their rights, including the right to education, and disappeared from public life under the Taliban.

Thousands of women have since lost their jobs or were forced to resign from government institutions and the private sector.

Girls have been prevented from attending middle and high schools. Many women have demanded that their rights be reinstated by taking to the streets, protesting and organizing campaigns.