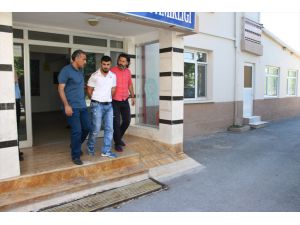 According to the sources, who spoke on condition of anonymity due to restrictions on talking to media, police were informed on Monday about two thieves inside a house in Beysehir district’s Yeni Mahalle Neighborhood.

When police raided the address, they managed to arrest one of the suspects, identified by his initials O.D., when he tried to escape from the house.

But the other suspect used a car to get away, who was spotted Tuesday along the Beysehir-Antalya route. He gave the police chase for about 30 kilometers, before he eventually gave himself up.

While police nabbed the second suspect, the jewels were initially nowhere to be found.

However, when the police noticed that the suspect was walking suspiciously, they had him X-rayed at the Beysehir State Hospital, where it was revealed that he had several objects hidden inside his rear end.

The pouch when excreted contained two gold rings, four gold earrings and two gold necklaces, which were then handed over to authorities.

What was more bizzare was the fact that the stolen jewelry belonged to the wife of the technician who carried out the X-ray on the suspect.

A Turkish court then remanded both suspects in custody.

Raging wildfires in Chile leave 26 deadCountry is receiving international aid to combat fires that have scorched some 270,000 hectares (667,000 acres)