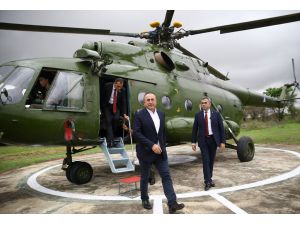 THAYET DISTRICT, Myanmar (AA) – Turkish Foreign Minister Mevlut Cavusoglu paid his respects Tuesday at one of two war cemeteries in Myanmar where Ottoman soldiers captured by the British during World War I were buried.

The ceremony at the cemetery, attended by a Turkish delegation and Thayet District’s administrator Aung Cho Oo, began with a minute of silence for the Ottoman prisoners of war, who were captured during WWI campaigns in the Middle East and forced into physical labor in Myanmar.

The Turkish flag was then hoisted as the country’s national anthem played, before Cavusoglu placed a wreath on a memorial monument and offered a prayer.

He then signed a guestbook at the memorial burial grounds, commemorating “the brave martyrs who fought and died in prisoner of war camps in Myanmar trying to defend and protect our dear nation during World War I”.

“It is our duty to pay a visit to the martyrs buried at the Thayet Turkish Cemetery. Even if they are buried thousands of kilometers away from home, it is our duty to make the memory of our self-sacrificing martyrs live forever,” he read.

“Our martyrs who lived here have made the roads, railways, dams and national parks, and have contributed toward the development of Myanmar whilst being held captive,” he said, adding that they had formed the foundation of relations with Myanmar and fostered its friendship with Turkey.

“They spent their lives away from home, from their families and loved ones to fight courageously and not even be able to be buried in their nation. I bow in respect to the memory of our dear martyrs,” Cavusoglu stressed.

A member of the local Muslim community then recited verses from the Quran.

After the ceremony, Cavusoglu told Anadolu Agency correspondents that the Turkish government’s maintenance efforts at the war cemetery through the Turkish Cooperation and Coordination Agency (TIKA) were the country’s duty to those interred at the site.

Underlining that there are cemeteries worldwide where those who fought for Turkey have been buried, Cavusoglu said TIKA seeks to reconstruct such memorial sites “in the manner they deserve”.

“It is unfortunate that we could not come to visit this cemetery until this day. With this visit, we hope to inaugurate a beginning by raising the flag and offering a prayer for our martyrs,” he said. “After seeing this cemetery today, I once again feel pride in my nation, my country and my people.”

Cavusoglu also visited the local Tha Har Ya library constructed by TIKA, surveying some of the books on its shelves.

The foreign minister traveled from Myanmar to Sri Lanka later in the day.

Aid campaign launched in Berlin for quake-hit TürkiyeAt least 2,379 people were killed and 14,483 others were injured when 2 major earthquakes hit Kahramanmaras, affecting several other provinces