Türkiye, US agree to maintain pace in 'positive bilateral agenda' 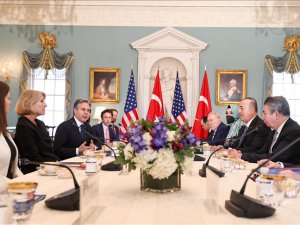 WASHINGTON (AA) - Türkiye and the US agreed Wednesday to continue their engagement under a strategic mechanism to review progress and maintain momentum in their "positive bilateral agenda," said a joint statement.

"The two sides welcome increased bilateral meetings, including at the highest level, under the (Türkiye-US) Strategic Mechanism," said the statement, which came after a meeting between Turkish Foreign Minister Mevlut Cavusoglu and US Secretary of State Antony Blinken at the State Department.

To date, the top diplomats have met four times as part of the mechanism.

Cavusoglu and Blinken "reiterated their commitment to a concrete and results-oriented positive bilateral agenda," said the statement, adding they discussed strengthening the Türkiye-US defense partnership, including modernization of Türkiye’s F-16 fleet.

Among the other issues they discussed were the Ukraine war, the South Caucasus, bolstering the NATO alliance, the NATO membership bids of Sweden and Finland, the situation in the Eastern Mediterranean, the fight against terrorism, the Syria crisis and bilateral relations, said the statement.

On NATO, Cavusoglu and Blinken "reaffirmed their long-standing commitment to collective defense as Allies, as well as to NATO’s Open Door Policy.”

"They discussed the implementation of the trilateral memorandum signed by Finland, Sweden and Türkiye to advance Finland and Sweden’s application to join the NATO Alliance," it said.

On the situation in the Eastern Mediterranean, the two men agreed on the importance of preserving stability and channels for communication.

Cavusoglu and Blinken also discussed the Syrian crisis and reiterated the commitment of Türkiye and the US to a Syrian-led political process in accordance with UN Security Council Resolution 2254.

"They welcomed the recent UN Security Council vote to extend the cross-border delivery of humanitarian assistance into Syria. The two sides also addressed broader issues in the Middle East and Africa," said the statement.