"We Must Kill All Muslims in America." 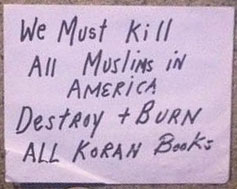 CAIR says the threats, which were printed on pieces of paper and left in a public place, included statements such as "All Muslims will be killed" and "We Must Kill All Muslims in America." [NOTE: The city has a significant Muslim population.]

Revere police tell CAIR they are taking the issue seriously and have taken a number of measures, including speaking to school and mosque officials and scheduling a meeting with community leaders.

"We thank the Revere Police Department for taking this issue seriously and for responding in a prompt and professional manner," said CAIR National Communications Director Ibrahim Hooper. "Given recent Islamophobic incidents nationwide, we urge community members to take all reasonable precautions in their daily activities and to report bias incidents." [CAIR asks that community members report any bias incidents to CAIR's Civil Rights Department at 202-742-3420 or civilrights@cair.com. Of course any crime or threat should be reported to police immediately.]

Over the weekend, CAIR called on law enforcement authorities to investigate vandalism targeting an Islamic school in Rhode Island as a hate crime. CAIR reported that the Islamic School of Rhode Island in West Warwick, R.I., was vandalized with anti-Muslim slurs spray-painted on the school, including "Now this is a hate crime" and "pigs," along with expletives referring to Islam's Prophet Muhammad and to "Allah."

At least 3 injured by missile strike on residential building in Ukraine’s KharkivInformation about victims being verified, all emergency services on site, says Kharkiv governor