When Islam came to Australia 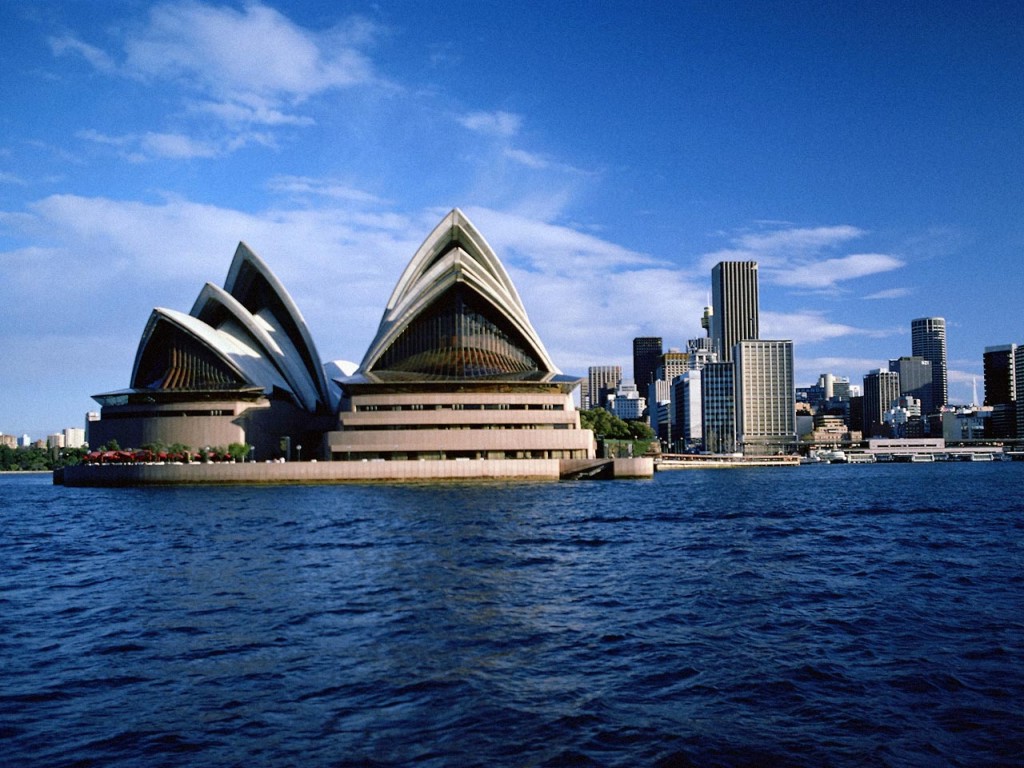 Few Australians are aware that the country's Aboriginal and Torres Strait Islander peoples had regular contact with foreign Muslims long before the arrival of Christian colonisers. And Islam continues to exercise an appeal for some Aboriginal peoples today, writes Janak Rogers.

The white lines are faint but unmistakable. Small sailing boats, picked out in white and yellow pigment on the red rocks of the Wellington Range in Arnhem Land, northern Australia, tell a different story from the one most Australians accept as the history of their nation.

They are traditional Indonesian boats known as praus and they brought Muslim fishermen from the flourishing trading city of Makassar in search of trepang, or sea cucumbers.

Exactly when the Makassans first arrived is uncertain.

Some historians say it was in the 1750s, but radiocarbon dating of beeswax figures superimposed on the cave paintings suggests that it was much earlier - one of the figures appears to have been made before 1664, perhaps as early as the 1500s. 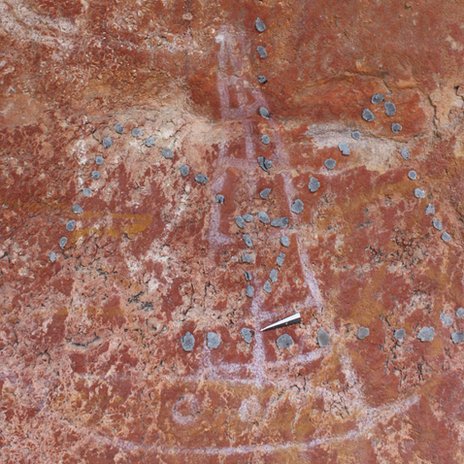 A cave painting of an Indonesian prau, found in Arnhem Land

They apparently made annual trips to gather the sea cucumbers, which fetched a high price because of their important role in Chinese medicine and cuisine.

The Makasssans represent Australia's first attempt at international relations, according to anthropologist John Bradley from Melbourne's Monash University - and it was a success. "They traded together. It was fair - there was no racial judgement, no race policy," he says.

Quite a contrast to the British. Britain designated the country terra nullius - land belonging to no-one - and therefore colonised the country without a treaty or any recognition of the rights of indigenous people to their land.

"If you go to north-east Arnhem Land there is [a trace of Islam] in song, it is there in painting, it is there in dance, it is there in funeral rituals," says Bradley. "It is patently obvious that there are borrowed items. With linguistic analysis as well, you're hearing hymns to Allah, or at least certain prayers to Allah."

One example of this is a figure called Walitha'walitha, which is worshipped by a clan of the Yolngu people on Elcho Island, off the northern coast of Arnhem Land. The name derives from the Arabic phrase "Allah ta'ala", meaning "God, the exalted". Walitha'walitha is closely associated with funeral rituals, which can include other Islamic elements like facing west during prayers - roughly the direction of Mecca - and ritual prostration reminiscent of the Muslim sujood.

"I think it would be hugely oversimplifying to suggest that this figure is Allah as the 'one true God'," says Howard Morphy, an anthropologist at Australian National University. It's more the case of the Yolngu people adopting an Allah-like figure into their cosmology, he suggests. 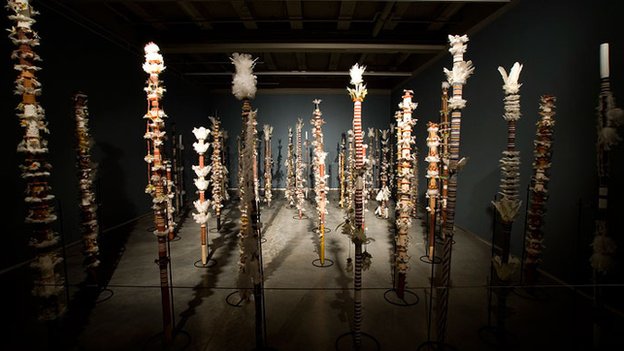 One elder has said that Aboriginal "morning star" poles were made to look like the masts of Indonesian praus, and that a pole would be presented to Makassan traders as a gift at the end of a farewell dance ritual each year

The Makassan sea cucumber trade with Aboriginal and Torres Strait Islander peoples ended in 1906, killed off by heavy taxation and a government policy that restricted non-white commerce. More than a century later, the shared history between Aboriginal peoples and Makassans is still celebrated by Aboriginal communities in northern Australia as period of mutual trust and respect - in spite of some historical evidence that this wasn't always the case. 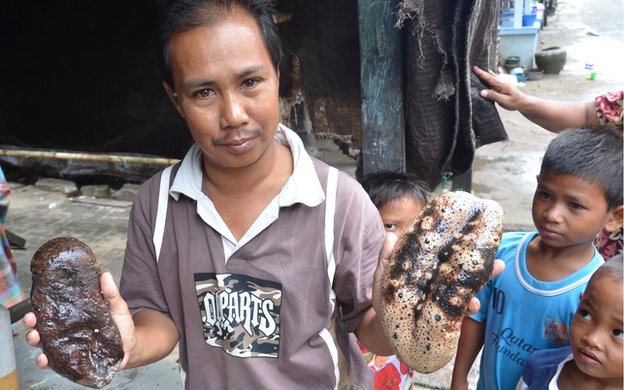 Using Daeng Rangka was the first Makassan captain to buy a licence from the British to catch sea cucumbers, and the last to visit Australia.

As well as a large family in Makassar, Using had three children with an Aboriginal woman.

In 1988, a descendent of his recreated the trip from Indonesia to Australia in a traditional prau as part of the latter country's bicentennial celebrations.

"I'm a historian and I know that the Makassans, when they came to Arnhem Land, they had cannons, they were armed, there were violent incidents," says Regina Ganter at Griffith University in Brisbane. But many in the Yolngu community are wedded to a view of the sea cucumber trade as an alternative to colonialism, she says, and even consider the Makassans long-lost relatives. When she mentioned the Makassans' cannons to one elder in the tribe, he dismissed it. "He really wanted to tell this story as a story of successful cultural contact, which is so different to people coming and taking your land and taking your women and establishing themselves as superior."

This wasn't the only contact between Muslims and Aboriginal peoples. In the late 19th and early 20th Centuries, the pearl-shelling industry brought so-called "Malays" from south-east Asia to work as indentured labourers in Broome on the north-west coast of Australia. Much like the Makassans, Malays intermarried with local Aboriginal people and brought with them Islamic religious and cultural practices. Today, plenty of families in Northern Australia have names that bear the mark of these interactions, like Doolah, Hassan and Khan. 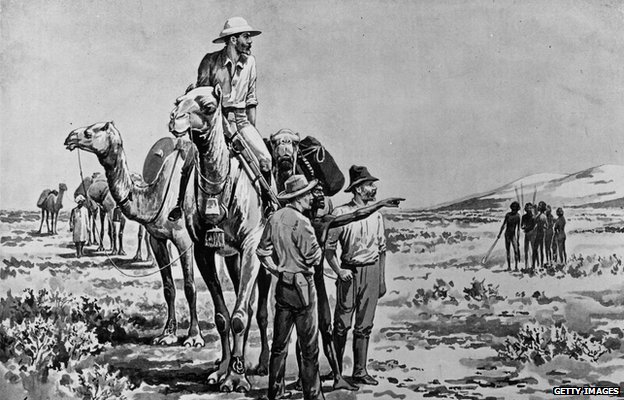 In a quiet suburb of Alice Springs, a town of 26,000 people in the heart of central Australia, there sits an unlikely building: a mosque. Its minaret rises against the backdrop of the craggy rock and red dirt of the MacDonnell Ranges.

It is called the "Afghan Mosque", and for a reason. Between 1860 and 1930 up to 4,000 cameleers came to Australia, bringing their camels with them. Many were indeed from Afghanistan, but they also came from India and present-day Pakistan. 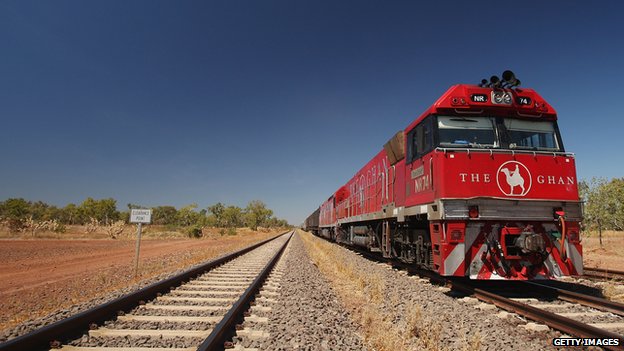 The Ghan railway line runs from Darwin to Adelaide

They played a key role in opening up the deserts, providing supplies to remote mission stations, and helping to lay crucial national infrastructure like the Overland Telegraph Line and the Ghan Railway line, which still runs today, crossing the Australian desert from north to south. "Ghan" derives from "Afghan", as the train's logo of a cameleer makes plain.

"My grandfather's father, he was a camel driver," says 62-year-old Raymond Satour. "They had their own camels, over 40 camels," he says. "On the camel train itself, that's when they met the Aboriginal people that were camping out in the bush, and they got connected then - that's how we are connected to Aboriginals."

Far from their homes on the sub-continent, Afghan cameleers built makeshift mosques throughout central Australia, and many intermarried with Aboriginal peoples. 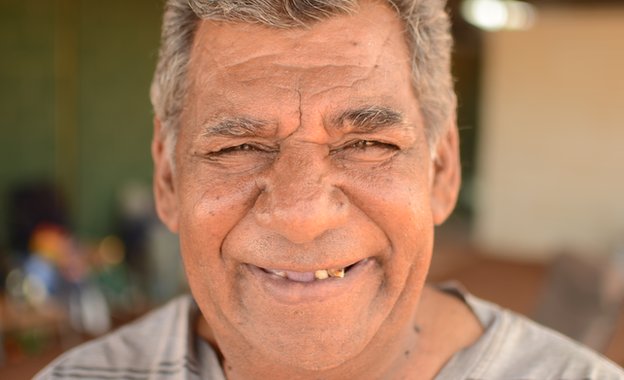 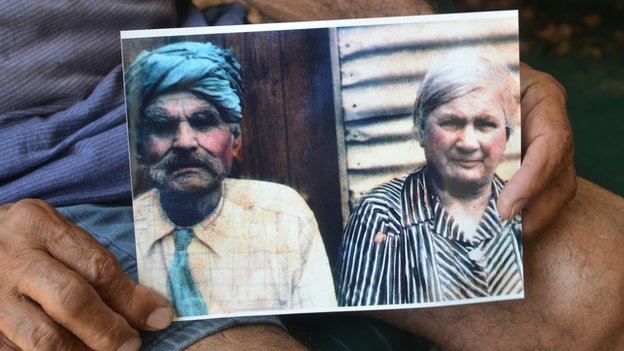 The work of the Afghan cameleers dried up in the 1930s, when motorised vehicles began to remove the need for the animals. Today, the Afghan Mosque in Alice is mostly filled with first-generation immigrants from India, Pakistan and Afghanistan. But worshippers from the mosque regularly visit the homes of some of the Afghan-Aboriginal descendants, including that of Raymond Satour. "The brothers come and hold prayer ceremonies and teachings," he says. "We're learning, and it's helping us keep alive our connection to Islam and the old Afghans." 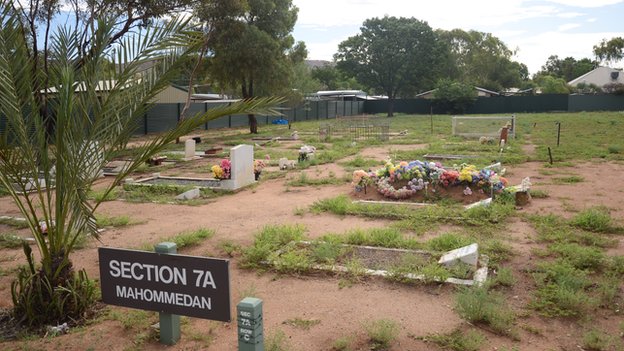 The Muslim graveyard in Alice Springs

"Malcolm's journey was unbelievable," agrees Justin Agale, who is of mixed Aboriginal and Torres Strait Islander descent and converted to Islam 15 years ago. "Here was a man who was interested in social justice and in furthering the cause of his people but he was also interested in his own spiritual journey to truth."

Agale is one of a number of Aboriginal people who, fairly or unfairly, have come to associate Christianity with the racism of colonial Australia.

"One of the things that the colonialists were very successful in Australia in doing was teaching the indigenous people that God hated us, and that we were unwanted children, that we were being punished for being savages," he says.

By contrast, he sees Islam as a "continuation" of his Aboriginal cultural beliefs. Agale's ancestors in the Torres Strait, the Meriam people, observed something they called Malo's Law, which he says was "in favour of oneness and harmony", and he sees parallels in Islam. "Islam - especially the Sufi tradition - has clear ideas of fitra and of tawhid, that each individual's nature is part of a greater whole, and that we should live in a balanced way within nature." 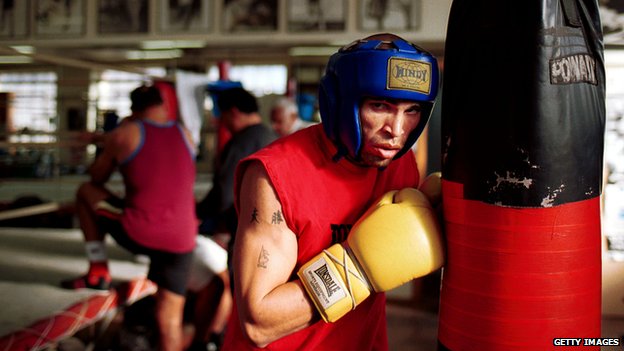 Anthony Mundine pictured in his gym in 2000

This sense of the compatibility of Aboriginal and Islamic beliefs is not uncommon, says Peta Stephenson, a sociologist at Victoria University. Shared practices include male circumcision, arranged or promised marriages and polygamy, and similar cultural attitudes like respect for land and resources, and respecting one's elders. 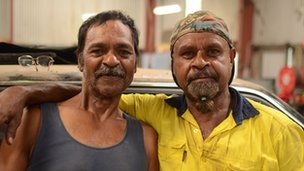 "Many Aboriginal people I spoke with explained these cultural synergies often by quoting the well-known phrase from the Koran that 124,000 prophets had been sent to the Earth," says Stephenson. "They argued that some of these prophets must have visited Aboriginal communities and shared their knowledge."

For some Aboriginal converts, however, the appeal of Islam is not one of continuity, but a fresh start. Mohammed - not his real name - was once homeless and an alcoholic, but he found the Islamic doctrines of regular prayer, self-respect, avoidance of alcohol, drugs and gambling all helped him battle his addictions. He has now been sober for six years and holds down a steady, professional job.

"When I found Islam it was the first time in my life that I felt like a human," he says. "Prior to that I had divided up into 'half this, quarter that'. You're never a complete, whole thing."

Mohammed rejects the criticism that has been levelled at him by some Aboriginal people that he turned his back on his traditional way of life. He believes Aboriginal culture was destroyed by colonialism.

"Where is my culture?" he asks. "That was cut off from me two generations ago. One of the attractive things about Islam for me was that I found something that was unbroken. 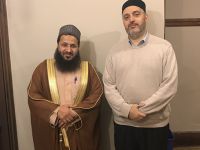 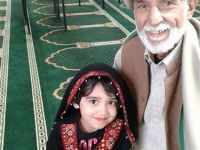 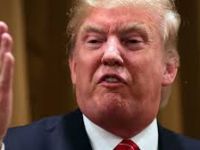 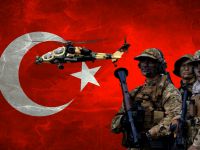 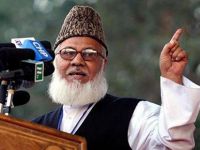 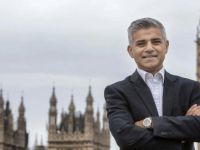