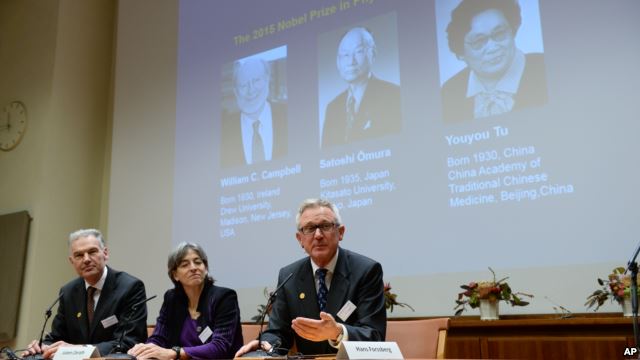 The Nobel committee in Stockholm has awarded the prize for medicine to scientists from Ireland, Japan and China.

William Campbell from Ireland and Satoshi Omura from Japan shared the prize for their discovery of a "novel therapy" against infections caused by roundworm parasites.

China's Tu Youyou discovered a drug that has significantly reduced the mortality rates for patients suffering from malaria, so she will also share in the prize.

The Nobel Prize committee said "These two discoveries have provided humankind with powerful new means to combat these debilitating diseases that affect hundreds of millions of people annually. The consequences in terms of improved human health and reduced suffering are immeasurable."

Campbell is currently a research fellow emeritus at Drew University in Madison, New Jersey on the U.S. east coast.

Omura, who holds two doctorate degrees — one in pharmaceutical sciences, the other in chemistry -- is professor emeritus at Japan's Kitasato University.