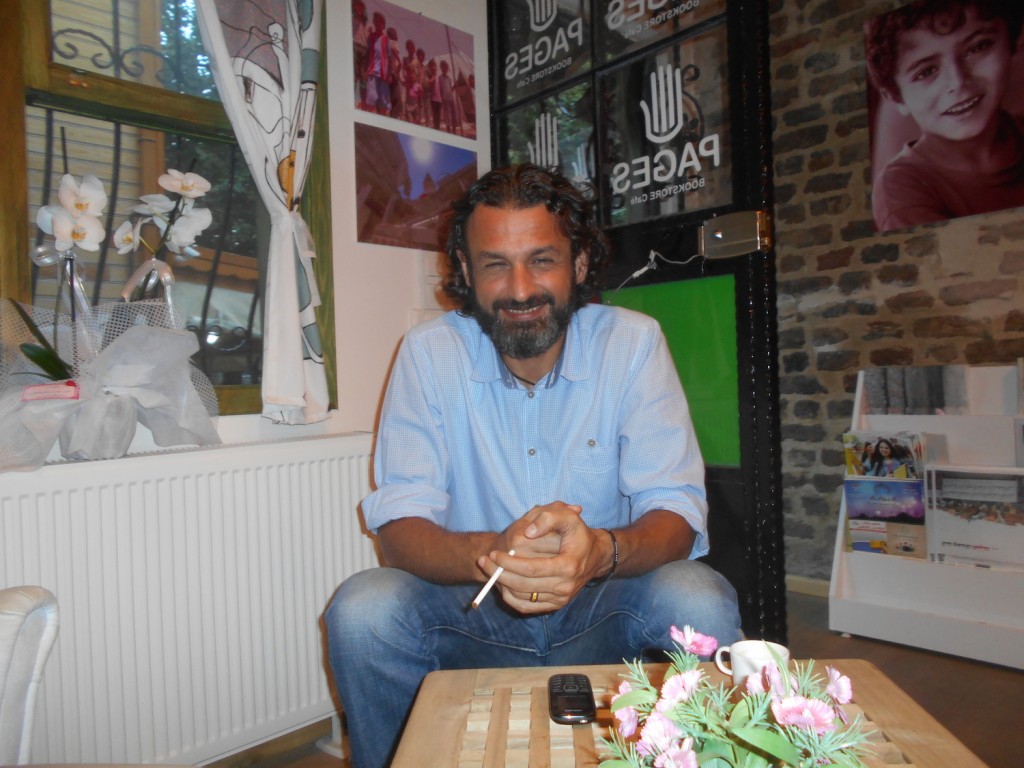 In the spring of 2012, Samer Qadri and his wife Gulnar Hajo came realized their future in Syria was bleak. During a short trip to the Abu Dhabi International Book Fair that year, the couple was notified Syrian government security forces had searched their Damascus-based children’s book publishing house, Bright Fingers, and made two arrests. They were looking for Samer.

Instead of returning to Syria, the coupled arranged to meet their two daughters in Amman, Jordan, where the family stayed for more than a year, before resettling in Istanbul.

“Istanbul is very beautiful. It looks a lot like Damascus. They are sister cities,” Samer said in an interview with Muftah. “I like Istanbul, but life is never easy when you are forced to leave your country, and I think this applies to all Syrians. I think all Syrians feel this way.” For Samer and Gulnar, the biggest challenge in Turkey was the language barrier. Since the family moved to Istanbul in September 2013, the inability to speak or understand Turkish has made the resettlement process grueling.

Feeling lost in translation, Samer sought refuge in a world he knew: books and publishing. But there were no Arabic bookstores in Istanbul. “I was surprised,” he says, noting that many Arab speakers “from Libya, Yemen, Iraq and Egypt live in Istanbul, and this community needs books in Arabic.” “Arabs need a venue to tell the world who we are, what our culture is, who our writers, painters, and artists are. It is also necessary for the Turks to know who we are and come here to know each other better,” Samer says. It was this desire to facilitate cultural exchange that was the seed for Pages, the café and bookshop that Samer opened with his wife in Istanbul’s Ayvansaray neighborhood in June 2015.

Samer first shared the idea of opening the store with a few friends, who were writers, actresses, and journalists. They loved the idea and joined the project. Since opening, Pages has been very well received: “Syrians, Turks, Arabs. Everybody comes here and thanks us for having done this,” Samer says, “Everybody needed something like this and this makes us happy. We are doing something that people needed.”

If the Middle East was a house, Pages could well be its living room. This was my impression, at least, when I first entered the bookshop. A young Syrian was leafing through several books in Arabic, while an exiled Iraqi professor from the University of Mosul scanned short stories written by Ernest Hemingway. Gulnar, herself an illustrator of children’s books, was staring pensively at the front door. Interrupting the scene, Samer emerged from the kitchen, carrying an assortment of aromatic coffees and cardamom to serve the patrons. He struck up a conversation with the young Syrian, as the professor began to eavesdrop, his eyes wandering away from the pages he was reading.

Just then, a young Turkish girl stormed into the café to return a book by French novelist Jean-Paul Sartre. The book was so unworthy, she claimed, that she did not even want her money back. With his charming manners, Samer invited her to choose another novel.

The entire exchange, from start to finish, appeared to take place in Samer and Gulnar’s home, rather than in a place of business. Indeed, the couple’s love for their store is deeply personal. As Gulnar showed me the three floors that make up Pages, she beamed with this sense of pride.

The store features books in Arabic, Turkish, English, and French that can be purchased, borrowed, or read cover to cover in any of the shop’s many nooks, on its wooden stairs, curled up on a sofa on the ground floor, or in the quiet of the back garden.

Gulnar has a soft spot for the third floor, which is entirely devoted to children’s literature. There, she organizes workshops and other activities for Syrian and Turkish children. It is a clear extension of her work back home at Bright Fingers, which she ran with her husband for twelve years before the conflict in Syria broke out.

As Samer explains, when they first opened Bright Fingers, “there were no good books for children in the Arab world. Nobody was interested in children, but children are the future!” “We had to do something, because we need everybody to read good books and not only those who can afford to pay for them,” he says.

Commenting on the war in Syria, Samer and Gulnar complain about the divisions across Syrian society. “As Syrians,” Samer says, “we have to talk to one another again, to respect each other more. It is important that we talk to know what we will do in Syria in the future.” At Pages, the couple promotes dialogue by inviting Syrian figures from all walks of life, ranging from prominent dissident Yassin al-Haj Saleh to the head of the Islamic community in Istanbul.

Samer and Gulnar want their bookstore to be a venue for all Syrians. “That is something that makes me feel proud of the Syrian community here [in Istanbul], especially the young people,” Samer explains. “They discuss what they want to do in Syria, listen to each other. They are more open-minded and this café gives me the chance to see them, listen to them, talk to them.”

Half a million lives lost to fake medicines in sub-Saharan Africa: UNUN says 605 tons of trafficked medical products were seized in West Africa alone between 2017 and December 2021
MOST VIEWED
1/20
PHOTO GALLERY
12345678
TOP NEWS
YESTERDAY| THIS WEEK |THIS MONTH
COLUMNIST
Video Gallery
12345678
All Rights Reserved © May 2014 US Muslims | Unauthorized and the resources published.
Haber Scripti: CM Bilişim