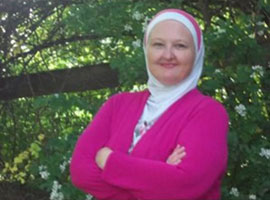 The Cincinnati chapter of the Council on American-Islamic Relations (CAIR-Cincinnati) today urged state and national law enforcement authorities to investigate threats made against a Muslim candidate for the Ohio House of Representatives as a hate crime.

Cathina Hourani, a candidate in the 52nd District, reportedly received threatening phone calls yesterday after a story ran in a local paper about her candidacy. The article was followed by hate-filled and threatening comments. One such comment said in part, "don't elect a Muslim SOB, you should start shooting them!"

Hourani has reported the threats to the proper law enforcement agencies. She is the first Muslim woman to run for public office at the state level in Ohio.

"Threats targeting a candidate for public office based on her faith are very disturbing and should be of concern to all Americans," said CAIR-Cincinnati Executive Director Karen Dabdoub. "We believe the rising level of bigotry targeting Muslims in our nation is a direct result of the Islamophobia industry pumping out this type of hatred on a daily basis."

In an effort to challenge growing Islamophobia in American society, CAIR launched a new website yesterday (www.islamophobia.org) to expose the network that produces anti-Muslim bigotry.