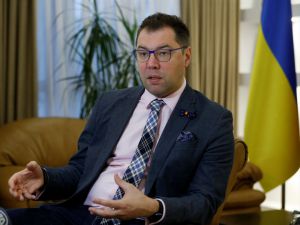 UNAIDS says hundreds of thousands of HIV, TB patients have access to treatment disrupted due to closure of 39 antiretroviral therapy sites

GENEVA (AA) - The UN on Friday said that the disruption of health services and supplies due to the war in Ukraine means hundreds of thousands of people living with HIV and tuberculosis have their treatment badly affected.

The warning came from UNAIDS and two organizations it works with, the Global Fund to Fight AIDS, Tuberculosis and Malaria, and Unitaid, which works in low- and middle-income countries against tuberculosis, malaria, and HIV/AIDS.

Before the war started, some 260,000 people were estimated to be living with HIV in Ukraine, 152,000 of whom were accessing essential life-saving antiretroviral medicines, said Ben Phillips from UNAIDS at a UN press conference.

“While there has been a great success in bringing necessary supplies into the country, there is a risk of many Ukrainians living with HIV not being able to receive treatment," said Phillips.

As of May 3, 39 antiretroviral therapy sites were closed and HIV testing was disrupted in the "occupied territories" and where hostilities occurred, Phillips said.

He said fewer people are being diagnosed and are starting HIV treatment.

There has been a 30% decrease in the cumulative number of people living with HIV who started antiretroviral therapy in 2022 compared to the same period in 2021 (Jan-May).

After Russia, Ukraine has the highest number of HIV-positive people in Europe.

"TB is a real problem in Ukraine. It's very important to have medicine for tuberculosis available," Unitaid's Herve Verhoosel said at a UN press conference.

At an earlier UN press conference, Ann Vaessen from the Global Fund said that the fund is working closely with Andriy Klepiko, one of its board members in Ukraine, to ensure patients have access to care and treatments for HIV and tuberculosis.

"As you know, hospitals have been destroyed and damaged, and approximately 11 million people have been forced to flee their homes," and 6.4 million of them are refugees, said Vaessen.

"Displaced people lack access to health care, and interrupting treatment for people with HIV and TB might be fatal. Ukraine had a high disease burden already before the conflict," Vaessen said.

She said that despite achievements in combating HIV and TB in recent years, Ukraine has the second-largest HIV epidemic in Eastern Europe and Central Asia and it remains one of the high-priority countries fighting TB in the region.

Klepikov said at the same press conference: “What woke me up at the start of the war is that it is not only a war against Ukraine, but Russia's war against fundamental principles of freedom, dignity, and integrity.”

While multiple partners have ensured a sufficient stock of HIV medicines in Ukraine, the distribution of medicines to people in need within the country remains a significant challenge, said UNAIDS.

"Antiretroviral therapy for post-exposure prophylaxis (PEP) for survivors of sexual violence is available," it said.